Five Words To Live By
By Joseph Prince

The people of Judah honestly thought they were bound for a tragic end.

Three large, bloodthirsty armies--a "great multitude," the Bible says--were advancing rapidly toward their tribe, threatening to kill them all and take over the land that they had previously inherited from God.

But God had other plans. He intervened spectacularly, setting ambushes against the attacking enemies, and even caused them to utterly kill and destroy each other. Can you believe it? Judah won the battles hands down, literally. They even found an abundance of valuables and precious jewely, all of which took them three whole days to gather. You can read their amazing story in 2 Chronicles 20-37 at the end of this article

Today, we might not find ourselves in actual battles like these, but in other very real battles in the areas of our health, careers, family relationships, or finances. But just as God did for the people of Judah, He is able to deliver us, and even make us gain an advantage from those battles. Hebrews 13:8 says, "He is the same yesterday, today, and forever." The key lies in the words the Lord told His people when they sought Him for help and guidance: "Do not be afraid nor dismayed because of this great multitude, for the battle is not yours, but God's"

2 Chronicles 20:15 He said: “Listen, King Jehoshaphat and all who live in Judah and Jerusalem! This is what the LORD says to you: ‘Do not be afraid or discouraged because of this vast army. For the battle is not yours, but God’s.

The battle is the Lord's

These were the same words young David announced to Goliath before the giant cam crashing down. These fire words--an unshakable promise of God--turned certain tragedy into undeniable triumph for His people then. This year, victory over our battles can be our reality too when we choose to live by thise five simple words.

VICTORY OVER OUR BATTLES

CAN BE OUR REALITY WHEN

WE CHOOSE TO LIVE BY

THE BATTLE IS THE LORD'S

Whatever your battle, God wants you, His beloved child, to give that battle over to Him and watch Him take care of your enemies. But so accustomed are we to fighting our own battles that we often find it hard to believe that God wants to take on our battle and do the fighting for us.

This is why I want you to see what transpired between the tribe of Judah's receiving news about the attacking armies advancing toward them and their eventual amazing victory. I pray you'll be greatly encouraged to see the Lord's heart for us in the face of seemingly impossible odds, learn how we can also surrender our battles to the Lord, and see the same kind of results today. 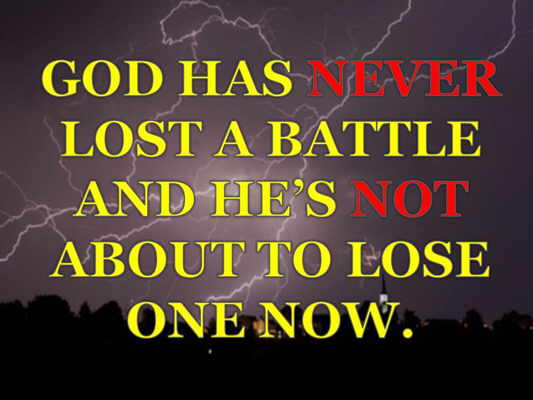 Some Quoted Books and Verses below
for this article

Their amazing story is told in 2 Chronicles 20-37, which says,
20Early in the morning they left for the Desert of Tekoa. As they set out, Jehoshaphat stood and said, “Listen to me, Judah and people of Jerusalem! Have faith in the LORD your God and you will be upheld; have faith in his prophets and you will be successful.” 21After consulting the people, Jehoshaphat appointed men to sing to the LORD and to praise him for the splendor of his holiness as they went out at the head of the army, saying: “Give thanks to the LORD, for his love endures forever.” 22As they began to sing and praise, the LORD set ambushes against the men of Ammon and Moab and Mount Seir who were invading Judah, and they were defeated. 23The men of Ammon and Moab rose up against the men from Mount Seir to destroy and annihilate them. After they finished slaughtering the men from Seir, they helped to destroy one another. 24When the men of Judah came to the place that overlooks the desert and looked toward the vast army, they saw only dead bodies lying on the ground; no one had escaped. 25So Jehoshaphat and his men went to carry off their plunder, and they found among them a great amount of equipment and clothing and also articles of value—more than they could take away. There was so much plunder that it took three days to collect it. 26On the fourth day they assembled in the Valley of Beracah, where they praised the LORD. This is why it is called the Valley of Beracah to this day. 27Then, led by Jehoshaphat, all the men of Judah and Jerusalem returned joyfully to Jerusalem, for the LORD had given them cause to rejoice over their enemies. 28They entered Jerusalem and went to the temple of the LORD with harps and lutes and trumpets. 29The fear of God came upon all the kingdoms of the countries when they heard how the LORD had fought against the enemies of Israel. 30And the kingdom of Jehoshaphat was at peace, for his God had given him rest on every side. 31So Jehoshaphat reigned over Judah. He was thirty-five years old when he became king of Judah, and he reigned in Jerusalem twenty-five years. His mother’s name was Azubah daughter of Shilhi. 32He walked in the ways of his father Asa and did not stray from them; he did what was right in the eyes of the LORD. 33The high places, however, were not removed, and the people still had not set their hearts on the God of their fathers. 34The other events of Jehoshaphat’s reign, from beginning to end, are written in the annals of Jehu son of Hanani, which are recorded in the book of the kings of Israel. 35Later, Jehoshaphat king of Judah made an alliance with Ahaziah king of Israel, who was guilty of wickedness. 36He agreed with him to construct a fleet of trading ships. After these were built at Ezion Geber, 37Eliezer son of Dodavahu of Mareshah prophesied against Jehoshaphat, saying, “Because you have made an alliance with Ahaziah, the LORD will destroy what you have made.” The ships were wrecked and were not able to set sail to trade.

2 Chronicles 20:13-15 says
13All the men of Judah, with their wives and children and little ones, stood there before the LORD. 14Then the Spirit of the LORD came upon Jahaziel son of Zechariah, the son of Benaiah, the son of Jeiel, the son of Mattaniah, a Levite and descendant of Asaph, as he stood in the assembly. 15He said: “Listen, King Jehoshaphat and all who live in Judah and Jerusalem! This is what the LORD says to you: ‘Do not be afraid or discouraged because of this vast army. For the battle is not yours, but God’s. 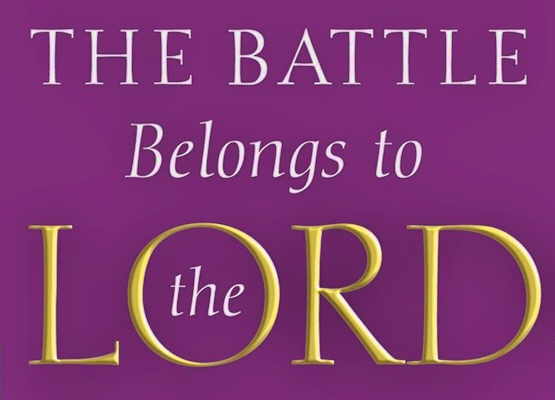