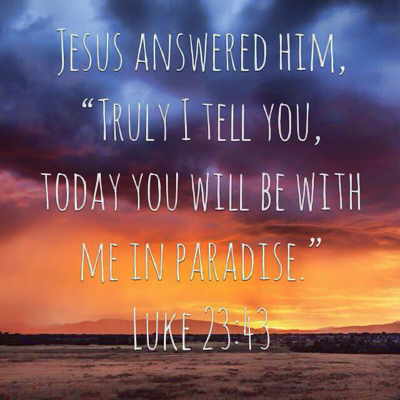 The Tale of the Crucified Crook

Based on a story by Max Lucado
The events surrounding Jesus' death and resurrection send a clear message:
You are valuable

The only thing more outlandish than the request was that it was granted. Just trying to picture the scene is enough to short-circuit the grandest of imaginations: a flat-nosed ex-con asking God's Son for eternal life? But trying to imagine the appeal being honored; well, that moves us beyond the realm of reality & into absurdity.

But as absurd as it may appear, that is exactly what happened. He who deserved hell got heaven, & we are left with a puzzling riddle. What, for goodness' sake, was Jesus trying to teach us? What was he trying to prove by pardoning this thug, who in all probability had never said grace, much less done anything to deserve it?

Well, I have a theory. But to explain it, I have to tell you a tale that you may not believe.

It seems a couple of thieves broke into a department store in a large city. They successfully entered the store, stayed long enough to do what they had come to do, & escaped unnoticed. What is unusual about the story is what these fellows did. They took nothing. Absolutely nothing. No merchandise was stolen. No items were removed. But what they did do was ridiculous.

Instead of stealing anything, they changed the price of everything. Price tags were swapped. Values were exchanged. The pranksters took a tag off a $395 camera & stuck it on a $5 box of stationery. The $5.95 sticker on a paperback book was removed & placed on an outboard motor. They repriced everything in the store!

Crazy? You bet. But the craziest part of the story took place the next morning. (You are not going to believe this.) The store opened as usual. Employees went to work. Customers began to shop. The place functioned as normal for 4 hours before anyone noticed what had happened.

Four hours! Some people got some great bargains. Others got fleeced. For 4 solid hours no one noticed that the prices had been swapped.

Hard to believe? It shouldn't be - we see the same thing happening every day. We are deluged by a distorted value system. We see the most valuable things in our lives peddled for pennies & we see the cheapest smut go for millions.

The examples are abundant & unsettling. Here are a few that I've seen recently.

The salesman who defended his illegal practices by saying, "Let's not confuse business with ethics."

The military men who sold top-secret information (as well as their integrity) for $6,000.

The cabinet member of a large nation who was caught illegally dealing in semiprecious stones. His cabinet position? Minister of Justice.

The father who confessed to the murder of his 12-year old daughter. The reason he killed her? She refused to go to bed with him.

Why do we do what we do? Why do we take blatantly black-&-white & paint it gray? Why are priceless mores trashed while senseless standards are obeyed? What causes us to elevate the body & degrade the soul? What causes us to pamper the skin while we pollute the heart?

Our values are messed up. Someone broke into the store & switched all the price tags. Thrills are going for top dollar & the value of human beings is at an all-time low.

One doesn't have to be a philosopher to determine what caused such a sag in the market. It all began when someone convinced us that the human race is headed nowhere. That humanity has no destiny. That we are in a cycle. That there is no reason or rhyme to this absurd existence. Somewhere we got the idea that we are meaninglessly trapped on a puny mudheap that has no destination. The earth is just a spinning mausoleum & the universe is purposeless. The creation was incidental & humanity has no direction.

The second verse is even worse. If man has not destiny, then he has no duty. No obligations, no responsibilities. If humanity has no destiny, then there are no guidelines or goals. If man has no destiny, then who is to say what is right or wrong? Who is to say that a husband can't leave his wife & family? Who is to say you can't abort a fetus? What is wrong with shacking up? Who says I can't step on someone's neck to get to the top? It's your value system against mine. No absolutes. No principles. No ethics. No standards. Life is reduced to weekends, paychecks, & quick thrills. The bottom line is disaster.

If humans have no duty or destiny, the next logical step is that humans have no value. If humanity has no future, we aren't worth much. We are worth, in fact, about as much as a tree or rock. No difference. There is no reason to be here, therefore, there is no value.

A pretty tough system, isn't it? Where does that leave the handicapped? Or the ugly or uneducated? Where does that place the aged? What hope does that offer the unborn child? Not much. Not much at all. We become nameless numbers on mislaid lists.

Now please understand, this is man's value system. It is not God's. His plan is much brighter. God, with eyes twinkling, steps up to the philosopher's blackboard, erases the never-ending, ever-repeating circle of history & replaces it with a line: a hope-filled, slender, promising line. And, looking over his shoulder to see in the class is watching, he draws an arrow on the end.

In God's book, humanity is heading somewhere. We have an amazing destiny. We are being prepared to walk down the church aisle & become the bride of Jesus. We are going to live with him. Share the throne with him. Reign with him. We count. We are valuable. And what's more, our worth is built in! Our value is inborn.

You see, if there was anything that Jesus wanted everyone to understand it was this: a person is worth something simply because he/she exists. That is why he treated people like he did. Think about it. The girl caught making undercover thunder with someone she shouldn't - he forgave her. The untouchable leper who asked for cleansing - he touched him. And the blind welfare case that cluttered the roadside - he honored him. And the worn out old windbag addicted to self-pity near the pool of Siloam - he healed him!

And don't forget the classic case study on the value of a person by Luke. It is called "The Tale of the Crucified Crook."

If anyone was ever worthless, this one was. If any man ever deserved dying, this man probably did. If any fellow was ever a loser, this fellow was at the top of the list.

Perhaps that is why Jesus chose him to show us what he thinks of the human race.

Maybe this criminal had heard the Messiah speak. Maybe he had seen him love the lowly. Maybe he had watched him dine with the punks, pickpockets, & potty-mouths on the streets. Or maybe not. Maybe the only thing he knew about this Messiah was what he now saw: a beaten, slashed, nail-suspended preacher. His face crimson with blood, his bones peeking through torn flesh, his lungs gasping for air.

Something, though, told him he had never been in better company. And somehow he realized that even though all he had was a prayer, he had finally met the One to whom he should pray.

"Any chance that you could put in a good word for me?"

Now why did Jesus do that? What in the world did he have to gain by promising this desperado a place of honor at the banquet table? What in the world could this crucified thief offer in return? I mean, the Samaritan woman I can understand. She could go back & tell the tale. And Zacchaeus had some money that he could give. But this guy? What is he going to do? Nothing!

And that is the point. Listen closely. Jesus' love does not depend upon what we do for him. Not at all. In the eyes of the King, you have value simply because you are. You don't have to look nice or perform well. Your value is inborn. 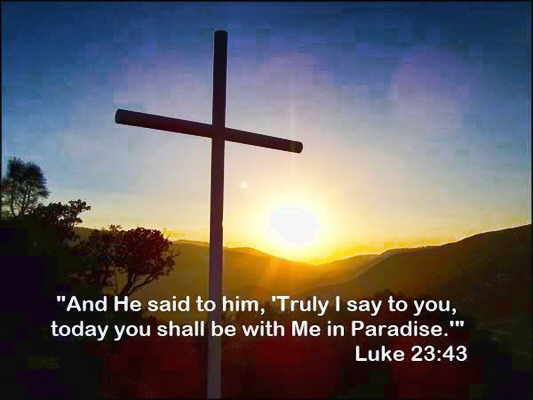 I do. I smile because I know that I don't deserve love like that. None of us do. When you get right down to it, any contribution that any of us makes is pretty puny. All of us - even the purest of us - deserve heaven about as much as that crook did. All of us are signing on Jesus' credit card, not ours.

And it also makes me smile to think that there is a grinning ex-con walking the golden streets who knows more about grace than 1,000 theologians. No one else would have given him a prayer. But in the end that is all he had. And in the end, that is all it took.

No wonder we call him our Savior. 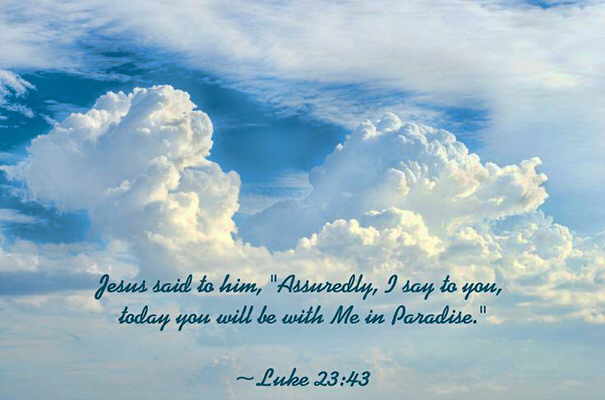